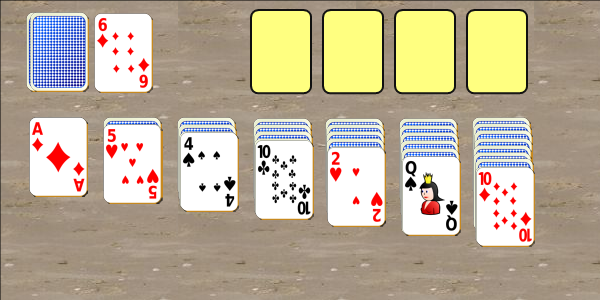 Object of the game:

The object of the game is to build four stacks of cards(one of each suit) in ascending order, from ace to king.

The layout of the game:

Solitaire is played with a standard 52 card deck. At the start of the game 28 cards are arranged into seven columns. The first column contains one card, the second contains two cards, and so on. The top card in each column is face up, the rest are face down.

You build your four stacks of ascending cards anywhere you want, but in computer solitaire they are usually positioned at the upper right corner.

Each of the four ascending stack that you need to win must start with an ace. If you don’t have an ace, you’ll have to move cards between the seven columns until you find one.

How do you move around the cards in the columns? There is one simple rule… Columns must be built in descending order, from king to ace and also the cards in columns must alternate red and black. So for example, you can put a red Queen on a black King.

You can also move sequentially organized runs of cards between columns, if it fits the general rule.

But there’s more… you can also use the deck, just open up a card from the deck and see if it fits anywhere, if it doesn’t you can open another one and so on. When the deck runs out, just pick it up and turn it back around so you can start turning cards at the begining.