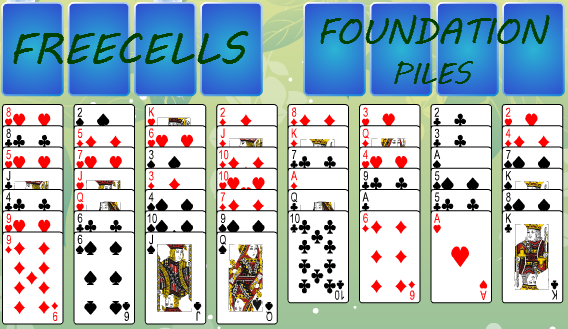 Freecell solitaire is a very popular solitaire game, mostly because it’s now a standard part of Windows. Playing it with real cards(without a computer) can be pretty tricky, but it’s still doable.

The game is played with one standard deck of cards. All the cards are spread into eight columns. First four columns are made of seven cards and the last four are made of six cards. All cards are set face up. Also eight free spaces have to be left on the board. The first four free spaces are “freecells” and the second are foundation piles.

The Goal of the Game

Like in any other solitaire, the goal is to move all cards of the same suit in a ascending order from Ace to King. In Freecell Solitaire you do this on the four foundation piles.

You can also use the “freecells” to put cards off the board. You can move any one card in to any one free “freecell”. Also, you can then move the cards back to the board, like you would move them between columns.

Empty columns can be occupied by any card. They are like a freecell, except you can start forming new descending, color alternating, sequences on them.

Moving a sequence of cards is a little tricky. You can only move a descending, color alternating, sequence around the columns, if you have enough free freecells and empty columns. The rule is that, if you could move the sequence of cards, one card at a time using freecells and empty columns, then you can move the whole sequence(a computer checks this automatically, that’s why it’s kind of hard playing it with real cards).

The game ends when all four suits are arranged in ascending order(from Ace to King) on the four foundation piles, or when there are no more possible legal moves to make.